and Thanks for All the Drinks

A couple days ago, I learned that my best friend at work is leaving. His name is Dave.

It didn't come as any big surprise since I knew of several other things leading up to this point, but I had no idea if his timeline was several months out or only a few weeks away. Turns out to be even shorter than that. He'll be gone, leaving not only this company but also this state, in just a week and a half.

Today, after our weekly team lunch, he came to my office and told me he had accepted an offer. We talked about his new opportunity, what the interview process was like, how quickly everything had happened, how much we have enjoyed working with each other and have learned from each other, and covered some logistics. Then he gave his notice to our VP and told the rest of the team. And that was that.

Now that it's official, the realization is starting to sink in. Some of the things I have anticipated for a long time are finally here, and things will be changing very soon. If I don't get my bearings and hop aboard a car, I'll miss the train. Dave's exit is now a catalyst for my own.

It's tough to know what to say. All at once I'm sad to see him go, excited for his opportunities, discouraged about losing his day-to-day friendship, and proud of his well-earned success.

He's the type of person that can learn any new technology in less than a day and can master it in a week. Be it a Node.js app backed by Mongo, a Spark app using Spring Integration for messaging, an Android app consuming a REST API, or loading a bunch of data into ElasticSearch and building a find-anything UI on top of it, Dave can pump out POCs like nobody's business. (Not to mention, he can fine-tune a Windows registry like a musical instrument!)

He really is one of the best software developers I've ever met, but more than that, he's a great guy with a positive, matter-of-fact attitude that made our team and my life better. He always looked forward to a challenge and never said no to, or complained about, any assignment ever given. He provided invaluable insight, was always tuned-in to his fellow team members, and constantly provided ideas for improving practices and processes to make everyone more productive. I've had the privilege of working and learning alongside him for the past 3 years, and I've really seen him grow into a great team leader.

And, above all that, I just plain like him.

One thing you should know about Dave is that he's a pretty healthy guy too, so he drinks water whenever we go out to eat. Our team goes out to lunch together at least once a week, usually on Fridays, and Dave and I would grab lunch together frequently beyond that. Out of the hundreds of times we've eaten together, I don't think I've ever seen him order anything to drink besides water for lunch. I, on the other hand, usually order overpriced soda. But, on several occasions, Dave has been snubbed with my drink on his bill. 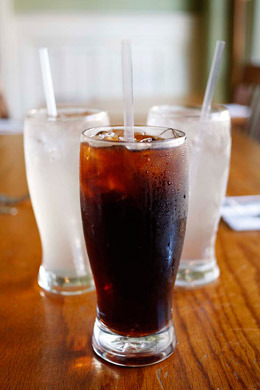 The first time it happened, it was funny. The second time it happened, it was just strange. The third time, I suspect conspiracy. But it really has happened so often that it's now just a regular thing. It's almost weird if Dave doesn't end up paying for my drink. But, of course, Dave's the type of guy who rolls with the punches and happily pays on my behalf without any expectation of reimbursement. I literally probably owe him about $40 worth of non-alcoholic beverages.

So, Dave, if you're reading this, thanks for the countless drinks you've bought me, and thanks for making my job and life a little sweeter every day for the past few years. You're a class act, and I'm gonna miss you. I really do wish you and your wife all the best. If you ever need anything or just want to shoot the breeze, all you have to do is call. I'll keep your tab open at the usual spots.

So long, and thanks for all the drinks.

Lost Turing to Eugene Goostman, I now just pretend to be human.

This update link alerts you to new Silvrback admin blog posts. A green bubble beside the link indicates a new post. Click the link to the admin blog and the bubble disappears.